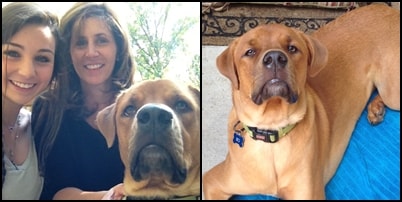 It’s been 2-1/2 months since Bo spent 2 weeks with you for aggression. I have to tell you, we didn’t think we’d be able to keep Bo those first two weeks after he came home. I think the fear of him attacking one of us again was so deep in our minds and he just didn’t act like the same dog after all that happened.

We were scared of him the first month at home, not that he acted out, but it was just fear. My husband and I were scared to leave him at home with our daughter for fear of him attacking.

But today, we are so happy we contacted you and spent the time to rehabilitate Bo. We have kept up with him being on the treadmill every day for 30 minutes and then a walk with me at night.  He is the best behaved dog in our neighborhood! He doesn’t jump anymore, he sits when told, he backs up when told, he is just a great dog. Both of my daughters adore him again, and my daughter who is still at home feels comfortable being with him alone, which was a big issue when he first came home. I have actually started giving him hugs and kisses, which is why you want a dog, to love on them.  Bottom line, Angie and Josh gave us our dog back and we just can’t thank you enough!